“It was he who gave some to be apostles, some to be prophets, some to be evangelists, and some to be pastors and teachers, to prepare God’s people for works of service, so that the body of Christ may be built up until we all reach unity in the faith, and in the knowledge of the Son of God and become mature, attaining to the whole measure of the fullness of Christ.” Eph. 4:11-13

“And the things you have heard me say in the presence of many witnesses entrust to reliable men who will also be qualified to teach others.” 2 Tim 2:2

As President of the Facultad de Teología, or as it is known in English the Latin America Theological Seminary of the Assemblies of God, I would like to explain what our ministry is about. We offer master´s level theological training in Spanish for national pastors, Bible School professors and National leaders throughout all of Latin America and the Caribbean.

Before I go into more detail about the Facultad it would be good to explain that the Assemblies of God in Spanish-speaking Latin America is blessed to have three very well developed ministries who attend to the theological training needs of national pastors, evangelists, Bible School professors and church leaders in Spanish-speaking Latin America and the Caribbean. These three ministries are overseen by SEC – Servicio de Educación Cristiana de las Asambleas de Dios en América Latina (Christian Education Services of the AG in Latin America). The membership of SEC is comprised of all of the AG National Superintendents and National Directors of Christian Education of the Spanish speaking countries of Latin America and the Caribbean as well the educators, both missionary and national alike, who head up the different ministries of SEC. The larger body meets every three years while the executive committee made up of both the elected officials and the ministry heads meets on an annual basis.

The Mission statement of SEC is: ” Planning and coordinating Christian education, providing educational and consulting services for the preparation of efficient workers.” The different ministries that are under the covering of SEC include:

They three education ministries that interest us today are:

Without a doubt the most well know of these three is the system of three year Bible Institutes found in all of our Spanish speaking AG National Conferences and each of these operate under the umbrella of the “Basic Plan” or as we know it in Spanish as El Plan Básico. A team of national and missionary educators worked together to develop the first edition of the Plan Básico in 1970. Since then numerous other revised and improved editions have been published: 1977, 1982, 1990, 1996, 2005, 2010 with the most recent coming out in 2013. The beautiful thing about the Plan Básico that has made it such an powerful and effective tool has been the fact that it was a joint effort between missionary educators and the different national churches and thus was not something that was developed solely by missionaries and then forced on the national churches. For the last number of years the project of these revisions has been administered  by the capable hands of our dear friend and colleague Judy Graner.

ISUM (LAAST) is the fourth year of the four year Bible School program. It is also a roving faculty that offers four, month long, live-in intensive courses for the training of National Pastors and leaders across Latin America and the Caribbean. They currently serve over 5,000 students and recently graduated student number 2,000. Mike and MonaRé Shields are the International Directors of ISUM and with their team they do an excellent job of training national pastors for ministry. 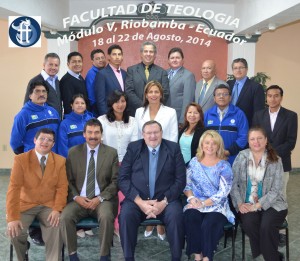 Facultad de Teología (Latin America Theological Seminary or LATS) was born of the desire of Latin Americans who had graduated from the Instituto de Superación Ministerial to continue their ministerial training. The Servicio de Educación (SEC) approved the project in its fifth plenary session in Panama City, Panama in October, 1985. Shortly thereafter SEC named missionaries Samuel Balius as the President of the new institution, Everett Ward as Vice President and Denis Rivera as Academic Dean. The offices were originally located in Montevideo, Uruguay and were later transferred to Springfield, MO in 1994.

LATS was designed to offer advanced training to recognized church leaders by delivering on- site, intensive month-long modules, in easily accessible regional locations at reasonable cost, thereby minimizing the time students would be away from families and ministry. The uniqueness of the program provides for mutual learning, mentoring, counseling, encouragement, friendship, growth and prayer as professors and students live, study and eat together.

The first course module took place in Moravia, San Jose, Costa Rica in May, 1988, being the only courses offered that year. That same year Eugene Hunt became a board member and professor.

In 1994 Larry McNeill was selected as Academic Dean; he and Dee became Professors. Mona Balius handled the bookkeeping. Mike Peterson became Coordinator of Resource and Development in 1996 and Jim Powers became the Administrator. In 1997 Richard Nicholson, Regional Director for LAC, became a member of the Administrative Committee. Facultad graduate Mary Gomez (now Landa) joined the team as Registrar in 1997 as an appointed missionary from the AG of Mexico.

LATS has grown from one course module in 1988 to five in 1994 to eighteen annually in 2014. Multiple courses are offered each year in Argentina, Bolivia, Colombia, Costa Rica, Dominican Republic, Ecuador, Guatemala, Mexico, Peru, two locations in the US and three locations in Cuba. The number of students has mushroomed to 2,000. Two degree programs are offered; one in the Theology of Ministry and the other is in Advanced Theological Education. To date over 75 have graduated with master’s degrees. There are currently over 30 fulltime and adjunct professors including Latin Americans, missionaries, pastors and other educators. All are experienced ministers and anointed educators holding master’s or doctoral degrees.

Perhaps the most challenging undertaking has been a 10-year effort to acquire academic accreditation. This is imperative for our students as several countries are now requiring an accredited degree for various ministries including teaching in some Bible colleges and the chaplaincy. The Facultad is partnering with the Assemblies of God of Peru to secure accreditation with the Ministry of Education. The day following the submission of our 800-page application, the government ceased accepting applications! Joint accreditation with AGTS is also being pursued in another Latin American country. 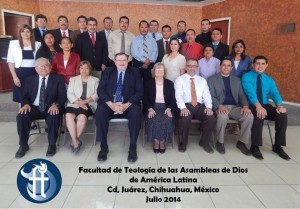 All the accomplishments are the result of God’s infinite power and the dedicated efforts of the Administrative team, faculty, students and national church leaders. God has marvelously blessed the Facultad team with a unity of purpose, spirit and mind.  It is evident that God has sovereignly chosen each member to bless the Body of Christ and fulfill their God-given gifts. Each member has been passionate about helping train leaders for the church in Latin America. Each member has joyfully sacrificed time, strength and resources. We are much more than a team, we are proud to be family.

After 17 years with the Facultad, Dr. Larry McNeill stepped down from leadership in 2011, although he continues to work in the area of ministerial education in Latin America. I was ratified as the new President of the Facultad by the Servicio de Educación Cristiana (SEC), effective October 28, 2011. Along with my lovely wife JoAnn we had served for 20 years as missionaries in Riobamba, Ecuador where with the Lord’s help we founded the Seminario Bíblico and the Indian District as well as being active in many areas of national church leadership.

Donna Bustos came on board with the Facultad as Academic Dean near the end of 2011. She came to us with a rich heritage of Bible School education including 36 years of ministry at the Ana Sanders Bible Seminary in Mexico City, Mexico. During a good number of those years she was the Director of the seminary.

During the last year or two we have also seen the addition to the Facultad team of two more missionary educators. Bruce Thomas comes to us as a full time teacher after many fruitful years of ministry in Spain and Mexico. David Hunt has also been a welcome addition to the team in recent months. Although raised in Latin America his last term was spent in ministry in several island nations in the Caribbean.

Latin America Theological Seminary (the Facultad) offers the highest level of ministerial education in the Assemblies of God for all 20 Spanish-speaking countries of Latin America & the Caribbean.  Students are from all these countries plus a few others.  We offer several master’s degree level courses every year at each of our extension centers located in 11 countries.

Our students are doing their post graduate studies and are therefore not novices in the ministry. The average student is 38 years of age and has been a pastor for 15 years. These students have a passion for the Lord and a strong desire to reach their maximum effectiveness.

We stand amazed before God as we contemplate the exponential effect of our ministry!!! We are honored and humbled to serve our students who rank among the top leaders of Latin America.
21 of our students are or have been General Superintendents. Dozens more are national and district executive leaders. What a privilege and a responsibility that God has given us.

May God continue to prosper the vital ministry of the Facultad de Teología!

One Reply to “The Vital Ministry of the “Facultad de Teología””